We have partnered with the best in the industry in each of our verticals. The Kendras have emerged as modern-day Assisted Digital Convenience Stores with a deep presence. We are allowing our partners to reach to the underserved and unserved markets of India. 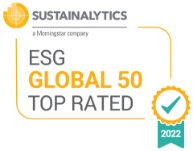 Vakrangee Limited has been identified as a top ESG performer out of more than 4,000 comprehensive companies that Sustainalytics cover in the global universe. In 2022.

Vakrangee Limited has been identified as a top ESG performer out of more than 4,000 comprehensive companies that Sustainalytics cover in the global universe. In 2022. 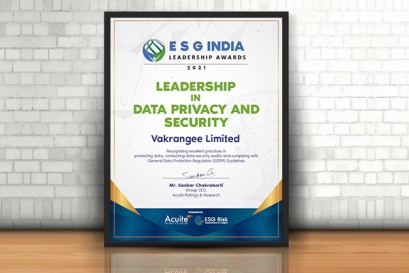 We prioritize the trust of all our stakeholders and employees, and place strong emphasis on data privacy and security.

Vakrangee has been Ranked amongst Top 100 Franchisee Opportunities for the year 2021.

The above is the Certificate of Achievement for being ranked among the Top-100 franchise brands for the year 2021 in The Franchising World’s annual survey. 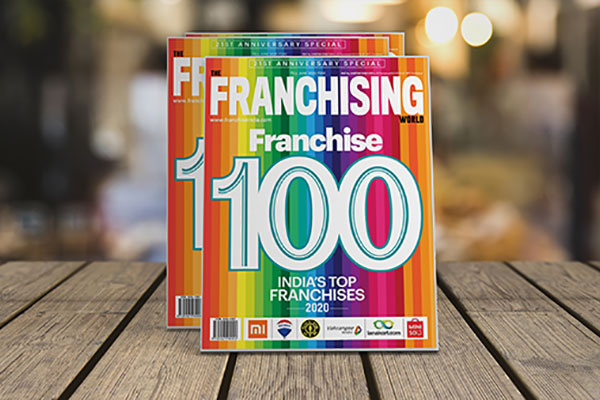 Vakrangee has been nominated in the ‘India’s Top 100 Franchisees’ list by the Franchisee India Magazine in the January 2020 edition. 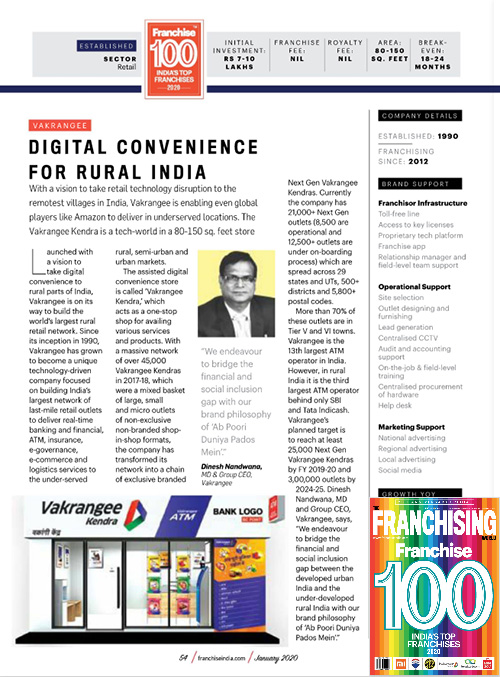 The Franchisee Magazine has identified Vakrangee in the ‘India’s Top 100 Franchisees’ list. Vakrangee’s strong and vast network helps the Company to step in the Top 100 Franchisees list. Launched with a vision to take digital convenience to rural parts of India, Vakrangee is on its way to build the world’s largest rural retail network.

The assisted digital convenience store is called ‘Nextgen Vakrangee Kendra’, which acts as a one-stop shop for availing various services and products. Currently, Vakrangee has over 21,000 Nextgen outlets of which 8,500 outlets are operational and over 12,500 outlets are under on-boarding process. These outlets are spread across 29 states and UTs, 500+ districts and 5,800+ postal codes. More than 70% of these outlets are in Tier V and VI towns.

Commenting on being nominated in the list, Mr Dinesh Nandwana, MD and Group CEO, said “We endeavour to bridge the financial and social inclusion gap between the developed urban India and the under-developed rural India with our brand philosophy of ‘Ab Poori Duniya Pados Mein’.” 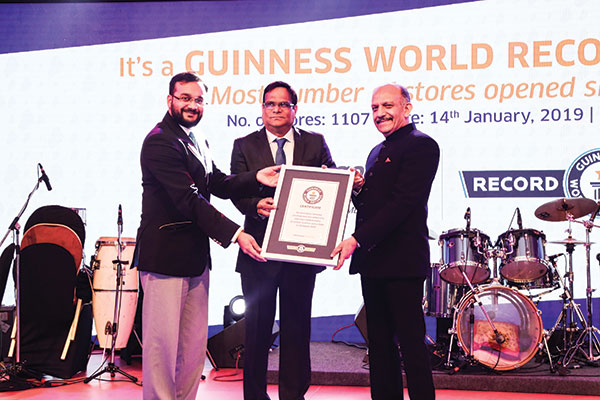 Guinness World Records title for the Most Stores Launched Simultaneously on 14th January 2019. Launches 1107 Nextgen Vakrangee Kendra stores across the country at 11.07 am on the same day. 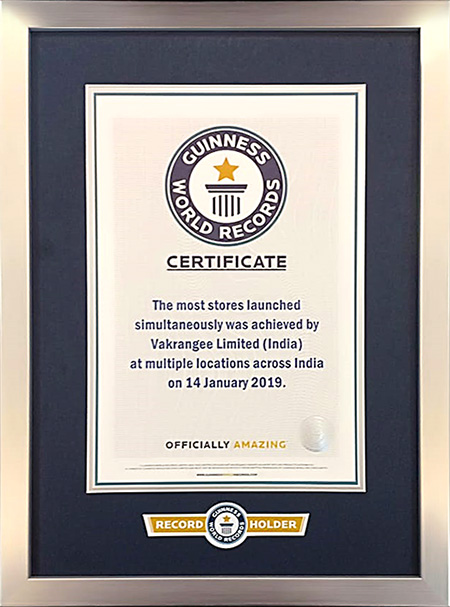 These 1,107 stores were part of the 3,300+ Nextgen Vakrangee Kendras which were launched on January 14, 2019. These Nextgen stores offer a comprehensive range of products and services across banking, insurance, ATM, assisted e-Commerce, e-Governance, Financial services and Logistics. These Nextgen outlets are spread across 19 states, 350+ districts and 2,000+ postal codes of the country, out of which more than 70% outlets are from Tier 5 and Tier 6 cities.

Commenting on the remarkable victory, Mr Dinesh Nandwana, Founder Promoter & Executive Chairman, said “We are honoured and excited to receive this certification from GUINNESS WORLD RECORDS. This global recognition is a validation of our belief and commitment to the transformation agenda to the Nextgen Vakrangee Kendras. This record-breaking feat also showcases capability of our extended family of Vakrangee employees, franchise partners and vendor associates.” 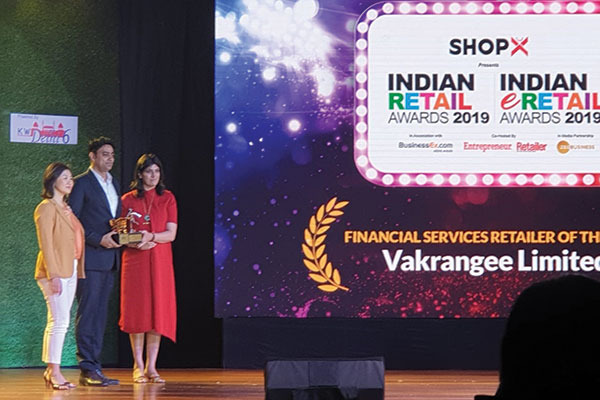 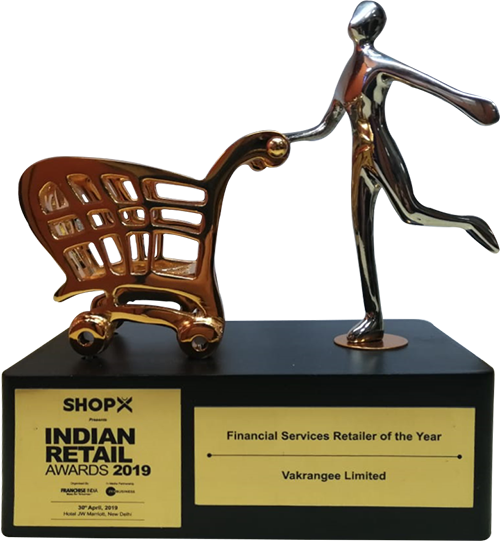 Financial Services Retailer of the Year

Vakrangee was awarded as the best ‘Financial Services Retailer of the Year’ at the Indian Retail Awards 2019 on April 30, 2019 in New Delhi. This award recognises company’s Nextgen Vakrangee Kendras’ growth and customer satisfaction in 2018-19.

The objective of the Indian Retail Awards is to recognize the Retailers who are closing the gap between operational reality and consumer expectations with great retailing practices. These practices include amongst others, promoting and motivating last mile distribution and delivery in retail and highlight new innovation and leadership in Indian retail world. These reputable and most respected awards in the retail world are hosted by Franchise India Holdings Limited, which is Asia’s largest integrated franchise solution company since 1999, and publishers of The Franchising World Magazine, India’s most comprehensive end-toend business and franchise magazine and the Retailer Magazine, the first retail opportunity magazine in the country which essentially focuses on Indian and International retailing whilst providing a consumer perspective.

Commenting on receiving the award, Mr Anil Khanna said “We are proud and honoured to receive this prestigious award. We believe this award is a ratification of our Nextgen Vakrangee Kendra business model. While this award recognises our excellence in Financial Services, these Nextgen outlets also offer a comprehensive range of products and services across banking, insurance, ATM, assisted e-Commerce (online shopping), e-Governance, Financial services and Logistics. We thank the extended Vakrangee family including our employees, business and our Franchisee partners to making this distinguished recognition a reality.”

Featured in 11 Indian Companies, up from an all-time low of eight last yearby Forbes Asia’s Best Under a Billion list for 2015

26th in the Deloitte Technology Fast 50 companies in India, 2012

18th in the Deloitte Technology Fast 50 companies in India, 2011

CA Business Leader - SME (3rd Rank) of the Year Award, 2008 to the Chairman by Institute of the Chartered Accountants of India